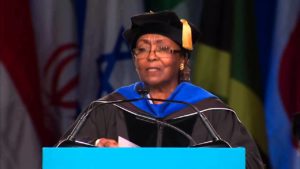 Edna Adan Ismail is the director and founder of the Edna Adan Maternity Hospital in Hargeisa, Somaliland and a courageous activist and pioneer in the struggle to end female circumcision. Born in Hargeisa, Ismail was trained as a nurse in the United Kingdom and practiced as a midwife for many years. From 1987 to 1991, she was the World Health Organization’s (WHO) Regional Technical Officer for Mother and Child Health. Her main responsibilities centered on issues relating to harmful traditional practices which affect the health of women and children. Ismail was also the WHO representative in Djibouti between 1991 and 1997. Additionally, Ismail has held many prestigious government posts, including foreign minister of the autonomous Somaliland from 2003 until 2006. She is served as president of the Organization for Victims of Torture and president of Somaliland Family Health Association, as well as a member of the Presidential Commission on Higher Education in Somaliland. Ismail was formerly married to Mohamed Haji Ibrahim Egal, a prominent political leader who headed the government in British Somaliland prior to the union of Somaliland and Somalia, and later served as prime minister of Somalia (19671969).

The members of this Coalition of DAN-QARAN ‘Somaliland First’ have worked tirelessly to carefully put together historic ideas to help move the future of the nation in the right direction. Ms. Ismail, we humbly ask you to consider these ideas that are in the best interest for our nation and its citizens. The most important ideas and proposals put together by the Coalition of DAN-QARAN ‘Somaliland First’ will prioritize:

Ms. Ismail, the Coalition of DAN-QARAN ‘Somaliland First’ movement are comprised of citizens and intellectuals within the Republic of Somaliland and the diaspora. The aforementioned members of the movement would like to see the ideas and proposals implemented towards the nations development.

The implementation of the ideas and proposals made by the Coalition of DAN-QARAN ‘Somaliland First’ will need sincere intellectuals who are dedicated in seeing the Republic of Somaliland reach its full potential. We are here for any support along the way.

Ms. Ismail, we are asking you to support us, so that our nation and its people will achieve these above goals.

Please Login with the Login credentials we provided to you.